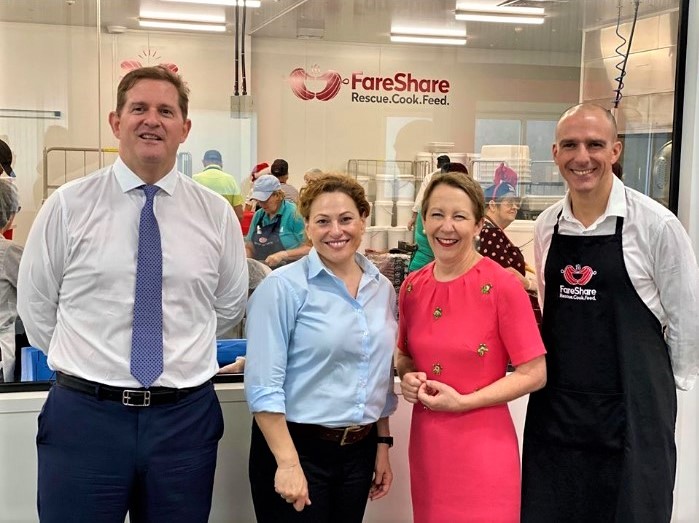 “Every day of the year, vulnerable Queenslanders benefit from the free, nutritious meals cooked by FareShare and distributed by Foodbank,” Deputy Premier and Treasurer Jackie Trad said during her announcement.

FareShare started its operations in Queensland just over a year ago, Ms Trad said, and it has already turned half a million tonnes of surplus food supplied by Foodbank into more than one million nutritious meals.

“QTC’s relationship with FareShare started with a corporate volunteering day earlier this year.

“QTC has also helped FareShare tackle some of their logistical challenges, including providing advice on sustainable funding streams to meet its operational expenditure needs, ensuring a sustainable supply of key ingredients and developing a ‘no-cost’ framework to transport meals to Thursday Island’s pre-natal centre.

The $100,000 donation will allow FareShare to employ another full-time chef, “enabling them to provide an additional 250,000 meals for vulnerable Queenslanders every year.”

Whether it’s those affected by the recent fires, flood victims earlier this year in Townsville, or vulnerable Queenslanders facing a Christmas alone, FareShare exists on the generosity, time and ingenuity of so many supporters,” Minister for Child Safety and Member for Bulimba Di Farmer said.

One in five Queenslanders have experienced food insecurity in the last year, Ms Farmer said referring to the Foodbank Hunger Report 2019 report; food waste cost the Australian economy an estimated $20 billion every year..

She said that in Morningside, 430 volunteers come together to create meals from donated food from major food retailers, that would otherwise have ended up in landfills.

FareShare opened its state-of-the-art Brisbane facility in October 2018 as part of its collaboration with Foodbank. In 2020 Fareshare aims to double its output in Brisbane to two million meals.

“It costs FareShare just 50 cents to cook a nutritious meal for someone in need in Queensland and I would encourage individuals and local businesses to consider supporting them, either by donating or volunteering their time.”

“QTC came on board at a critical time when FareShare had just arrived in Brisbane and was trying to establish a community here,” said Marcus Godinho, FareShare CEO.

“QTC’s collaborative approach to solving the problems we face has been highly valuable and resulted in real solutions put on the table for our business challenges.”

Read: Murarrie Recreation Hub Is Now Open for Public Use