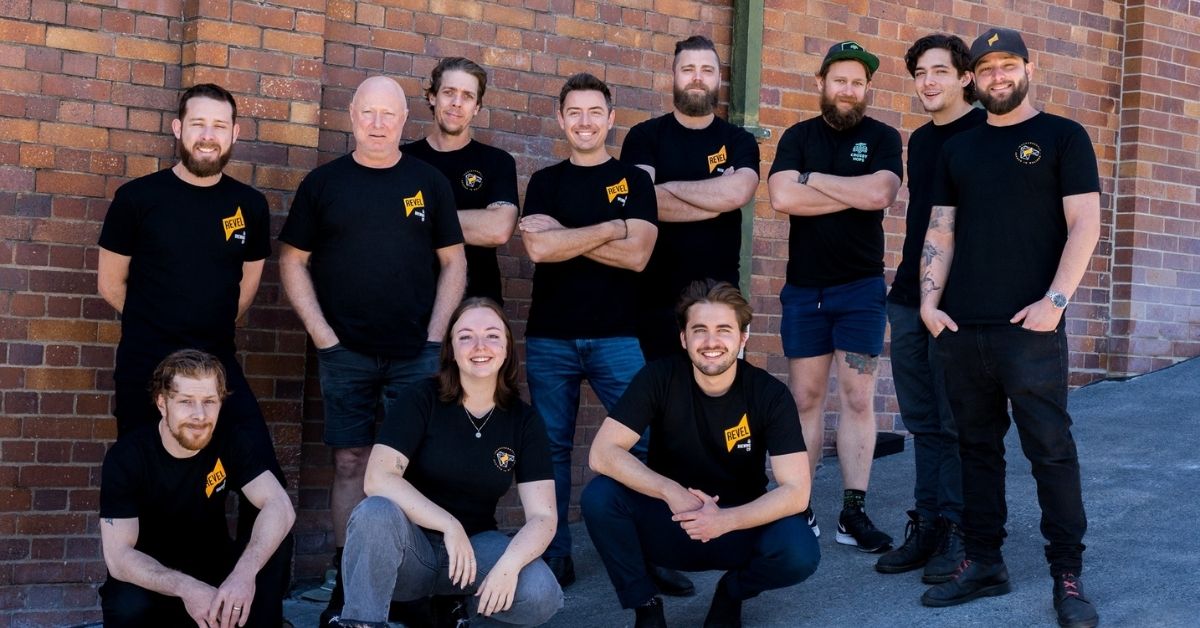 Nearly 18 months since they announced their expansion plans, Revel Brewing Co’s newest brewery and eatery, their second after their hugely successful Bulimba launch, is now open at the Rivermakers precinct in Morningside.

Located at the century-old former site of the Commonwealth Acetate of Lime Factory, the brewery-cum-eatery is next door to Low ‘n Slow Meat Co and Bavay Distillery.

Though it’s in a heritage building, much of Revel Brewing Co Morningside, officially known as Revel Rivermakers Restaurant, is in keeping with the original Bulimba outlet, with plenty of communal seating outdoors and steel tables decked with planter boxes indoors. The old building’s brick and timber, however, have remained untouched, lending more character and a cosy atmosphere to the restaurant.

History of the Rivermakers Precinct

The Rivermakers precinct has several buildings built from 1917 to 1920 across 30 hectares of land, including the Commonwealth Acetate of Lime factory, designed by chemist and brewer Auguste deBavay.

During the First World War, the Australian Commonwealth Arsenal established its own defence factories to ensure the supplies of manufactured goods and armaments. The Morningside site, specifically designed for fermenting and brewing, focused on acetate of lime for the production of cordite used by the military. Auguste deBavay donated his patent process for acetone through fermenting and distilling molasses to the Commonwealth of Australia after the war.

The Morningside site then became the base of the Royal Australian Navy during the Second World War and the Commonwealth Acetate of Lime factory was repurposed as a hostel for immigrants in the 1950s. This has contributed to the growth and diversity of the culture in Brisbane.

By the 1960s, Hans Continental Smallgoods moved his business into the precinct until 2008. The site was undisturbed for many years until 2020, when Revel opened its brewery.

Setting up During the Pandemic

Meanwhile, Owners Jay Neven and Matthew Flexman said that it has been quite a challenging year leading up to the Morningside venue’s opening due to COVID restrictions but they could not pass up the chance to be part of the urban renewal of this precinct.

Charmed by the site’s historical facets, the Revel team knew that expanding to this location was the best decision.

Though the restaurant opened in early November 2021, the brewing crew has been hard at work at the bigger Rivermarker site, producing more beer than the Bulimba outlet in the last 12 months.

Whilst the first store is known for its perfect pairing of pizza and beer, the Morningside site will be offering more family-friendly dishes from chef Dan Cart, such as the polenta fries, plant-based burgers, cauliflower wings, classic chicken schnitzel, and pan-fried wild barramundi. There’s even a tasty kids’ menu featuring cheese toasties and chicken nuggets.

“Awesome new venue from the Revel Brewing team located in Bulimba. I went for dinner on the opening night & had a great evening. Good varied menu & huge selection of beers on tap with their core range & rotating specials.”

“The buffalo wings are absolutely on point. I’ve been all over Brisbane looking for the best wings and i think I have a new favourite. Beers are always good from Revel, but the Vianna Lager on tap is the standout for me atm.”

“This is a fantastic venue, I never even knew this building existed and they’ve done a great job of repurposing it. We had the plant based burger and nachos which were both very good, the beers were excellent and the staff were extremely friendly and helpful. Are they finding their feet slightly? Maybe. But credit where credit’s due this is a fair feat to pull off in a sizeable venue compared to their original location in Bulimba. And it was FULL today so clearly they’re doing a lot right even in the early days. We’ll absolutely go back. And when a few other places open up around it this will be a great little precinct! Credit to Revel for leading the way and setting the standard.”